My colleague Sam Millette, manager, fixed income on Commonwealth’s Investment Management and Research team, has helped me put together this month’s Economic Risk Factor Update. Thanks for the assist, Sam!

The economic reports released last month largely showed continued growth. The April employment report indicated that the pace of hiring remained strong during the month, which was an encouraging signal that the economic recovery remains healthy despite the headwinds created by high levels of inflation. That said, both service sector and consumer confidence declined, which could be a headwind for future spending growth.

On the medical side, daily new case growth increased modestly in April but remained well below the highs we saw earlier in the year. Looking forward, high levels of vaccination and natural immunity from previous exposures are expected to help limit the economic damage from the pandemic.

Despite the continued economic growth during the month, the high levels of inflation, the Fed’s plans for tighter monetary policy throughout the year, and the uncertainty caused by the Russian invasion of Ukraine remain. We have left the overall risk level at a yellow light for now. 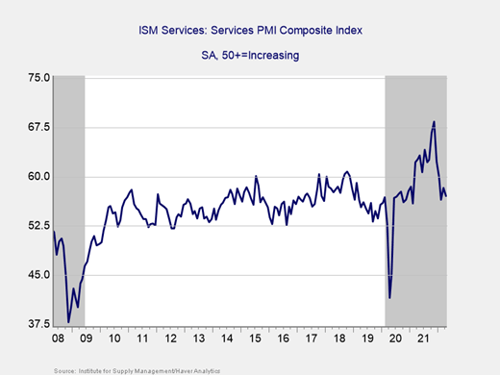 Service sector confidence declined modestly last month, as the ISM Services index fell from 58.3 in March to 57.1 in April against calls for an increase to 58.5. While the decline in April was slightly disappointing, it still left the index above the recent low of 56.5 we saw in February. This is a diffusion index where values above 50 indicate growth, so this result still signals continued expansion during the month.

As you can see in the chart above, service sector confidence remains well above the lows from initial lockdowns and near pre-pandemic levels despite the larger-than-expected drop during the month.

While confidence remains in expansionary territory, the recent relative weakness of the index is a potential cause for concern and highlights the challenges businesses are facing due to rising prices and labor shortages. Given the fact that the index remains near a one-year low, we have left this indicator yellow for now. 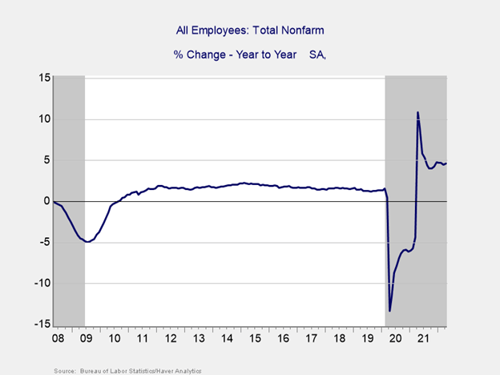 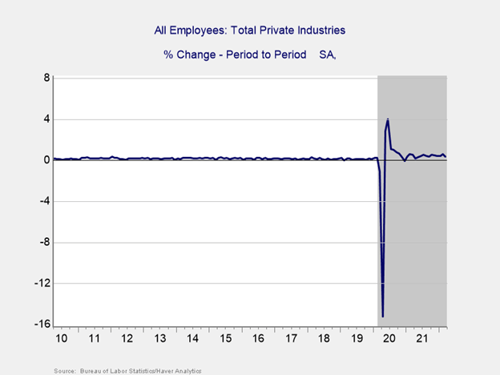 April’s employment report showed that 428,000 jobs were added during the month, which was better than the projected 380,000 jobs and is in line with March’s report. The strong April result marks 16 consecutive months with solid job growth. This also indicates that the labor market recovery continued at a healthy pace despite the headwinds created by employment costs and labor shortages during the month.

The underlying data was also encouraging, as the unemployment rate remained in line with pre-pandemic levels. Wage growth also increased on a monthly and year-over-year basis, highlighting the positive impact for workers from the tight job market. While there are signs of slowing elsewhere in the economy, the job market continues to be a significant driver of growth.

Given the better-than-expected job growth in April and the solid underlying data, we have left this indicator at a green light for now. 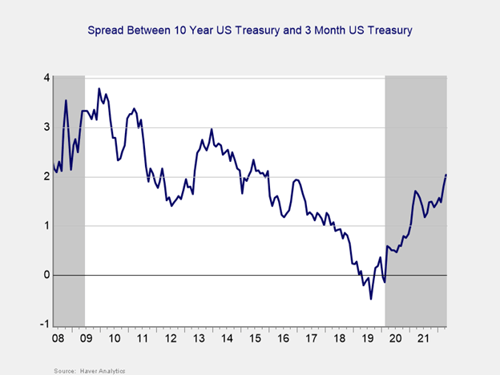 The rise in both short- and long-term yields was primarily due to growing expectations of the Fed’s rate hikes throughout the year and high levels of consumer and producer inflation.

The Fed has hiked the federal funds rate by 75 bps so far this year. Economists expect to see the Fed focused on combating inflation in 2022, which could lead to larger and more frequent rate hikes as the central bank tries to normalize monetary policy. While tighter monetary policy could lead to some market volatility, it is an encouraging signal that the Fed views the economy as healthy enough to endure a faster return to normal.

Given the fact that the spread between the 3-month and 10-year Treasury rates remains well outside of the historical inversion danger zone, we have left this signal at a green light for now. 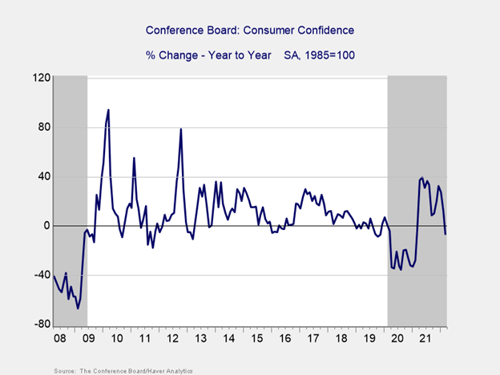 Consumer confidence fell modestly from an upwardly revised 107.6 in March to 107.3 in April against calls for an increase to 108.2. On a year-over-year basis, confidence declined by 8.7 percent in April, which follows a 6.4 percent year-over-year decline in March.

Historically, declines in confidence of 20 percent or more are a signal of a recession during the past year; the fact that the year-over-year figure remained outside of the historical danger zone in April was reassuring. That said, this marks the first two consecutive months with year-over-year declines in confidence in more than a year, which is a potential cause for concern.

Given that confidence continued to decline on a year-over-year basis in April, we have left this indicator at a yellow light for now, although further year-over-year declines in the months ahead could lead to another downgrade. 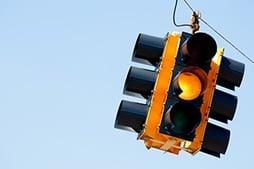 The data releases for April continued to show signs of economic growth despite concerns about inflation and the Russian invasion of Ukraine. Looking forward, further economic growth remains the most likely path forward; however, as we’ve seen throughout the pandemic and at the start of the year, there are real risks that remain in this outlook.

The continued strong hiring growth during the month was good news, but it’s still too early to say the job market is back to full pre-pandemic levels. The modest declines in service sector and consumer confidence were potentially concerning, and both should be monitored in the months ahead. Ultimately, the pace and path of the expected recovery in the short term remain uncertain. Therefore, caution is still warranted.

We have left the overall economic risk indicator at a yellow light to reflect continued uncertainty and the potential for new setbacks in the months ahead.