My colleague Sam Millette, manager, fixed income on Commonwealth’s Investment Management and Research team, has helped me put together this month’s Market Risk Update. Thanks for the assist, Sam!

Equity markets experienced widespread sell-offs in June due to rising investor concern about slowing economic growth and persistently high levels of inflation. The S&P 500 lost 8.25 percent during the month, while the Dow Jones Industrial Average lost 6.56 percent. The Nasdaq Composite saw the largest decline, as the technology-heavy index was down 8.65 percent in June. The market turbulence capped off a challenging quarter for equities and served as a reminder that real risks remain for markets that should be acknowledged and monitored.

Recessions are strongly associated with market drawdowns; in fact, 8 of 10 bear markets have occurred during recessions. The National Bureau of Economic Research, which declared that a recession started in February 2020 when markets plunged, announced that it ended shortly thereafter. Despite that and the ongoing expansion since then, economic risks remain.

On the whole, the economic recovery continued in June, although uncertainty about the path of the recovery remains. The primary risk is a deeper slowdown in growth and tighter monetary policy from the Fed. Given the uncertainty surrounding inflation and concerns about slowing growth, we have kept the economic risk level at a yellow light for now. Although the most likely path forward is continued economic growth, the lowered confidence is a reminder that the recovery pace is uncertain, and we will likely see setbacks along the way.

One major systemic factor is the price of money, otherwise known as interest rates. They drive the economy and financial markets and, historically, have been able to derail them. Rates have been causal factors in previous bear markets and deserve close attention.

Risk factor #1: The yield curve (10-year minus 3-month Treasury rates). We cover interest rates in the economic update, but they warrant a look here as well. 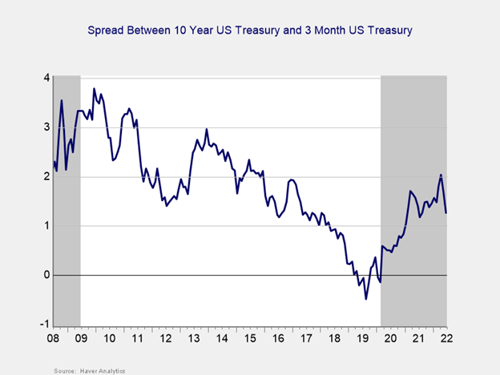 The rise in short-term yields was primarily due to tighter monetary policy from the Fed and high levels of consumer and producer inflation. The Fed has hiked the federal funds rate 150 bps so far this year, and economists expect to see the Fed focused on combating inflation in 2022. This could lead to larger and more frequent rate hikes as the central bank tries to normalize monetary policy.

While this normalization process is a good sign for the ongoing economic recovery and could help combat high levels of inflationary pressure, rising rates can harm stocks, as we’ve seen so far this year. Given the negative impact of rising rates on equity valuations, we have left this indicator at a red light for now.

Beyond the economy, we can also learn quite a bit by examining the market itself. For our purposes, two things are important:

Risk factor #1: Valuation levels. When assessing valuations, we find longer-term metrics (particularly the cyclically adjusted Shiller P/E (CAPE) or price-to-earnings ratio, which looks at average earnings over the past 10 years) to be the most useful in determining overall risk.

Valuations declined in July, marking eight consecutive months with declining valuations. The Shiller CAPE ratio dropped from 29.53 in June to 28.90 in July. This result left the index well below the recent high of 38.58 we saw in November of last year.

Even though the Shiller CAPE ratio is a good risk indicator, it’s a terrible timing indicator. To get a better sense of immediate risk, let’s turn to the 10-month change in valuations. Looking at changes rather than absolute levels gives a sense of the immediate-risk level because turning points often coincide with changes in market trends. 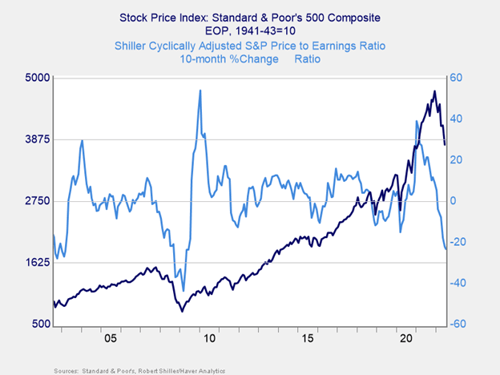 Above, you can see that when valuations roll over—with the change dropping below zero over a 10-month or 200-day period—the market itself typically drops shortly thereafter. This relationship held at the start of the pandemic, and we’ve seen that play out again this year. On a 10-month basis, valuations declined 23.1 percent in July, following a 22.2 percent decline in June. This now marks six consecutive months with declining 10-month valuations. Given the continued decline in valuations this year, we have kept this indicator at a red light for now. 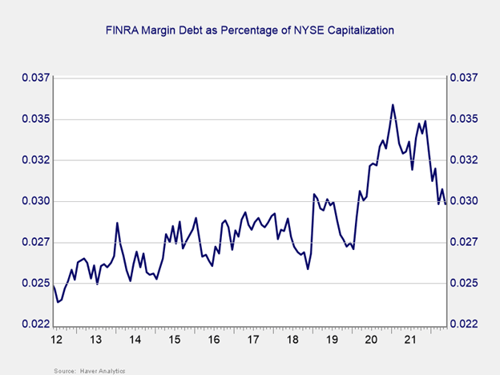 Debt levels as a percentage of market capitalization increased notably in 2020 and remained elevated throughout much of 2021. Since then, we have seen both absolute and relative margin debt largely decline from the recent highs we saw in late 2021. Margin debt as a percentage of market capitalization declined in May after a modest increase in April.

Despite the recent declines in margin debt, the overall level of margin debt remains high on a historical basis. The high level of debt associated with the market is a risk factor on its own but not necessarily an immediate one.

For immediate risk, changes in margin debt over a longer period are a better indicator than the level of that debt. Consistent with this, if we look at the change over time, spikes in debt levels typically precede a drawdown. 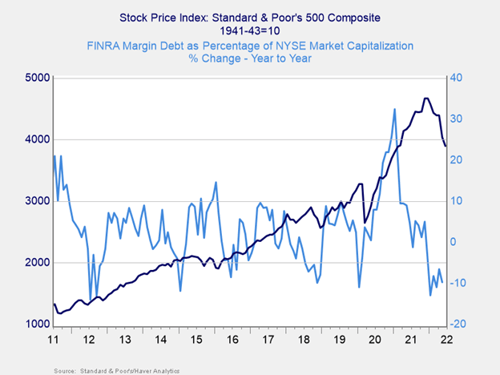 As you can see in the chart above, margin debt as a percentage of market capitalization declined 9.67 percent on a year-over-year basis in May, following a 6.57 percent drop in April. This now marks six consecutive months with declining year-over-year margin debt.

Although margin debt as a percentage of market capitalization declined on a year-over-year basis in May, the high absolute level of margin debt is worth monitoring. We have kept this indicator at a yellow light for now; however, we may see upgrades in the months ahead if we continue to see margin debt decline on both an absolute and relative basis.

Risk factor #3: Technical factors. A good way to track overall market trends is to review the current level versus recent performance. Two metrics we follow are 200-day and 400-day moving averages. We start to pay attention when a market breaks through its 200-day average, and a breakthrough of the 400-day average often signals further trouble ahead.

Technical factors were not supportive for major U.S. equity markets in June. All three major U.S. indices ended the month below their respective 200-day moving averages. This marks three consecutive months with all three major indices ending the period below trend.

The 200-day trend line is an important technical signal that is widely followed by investors, as prolonged breaks above or below this level could indicate a longer-term shift in investor sentiment for an index. The 400-day trend line is also a reliable indicator of a change in trend, and the S&P 500 ended the month below this trendline as well for the second month in a row. While it’s too soon to say that investors have turned negative on U.S. equities based on technicals alone, the continued weakness in June is a concern. Therefore, we have kept this signal at a red light for now.

Risk factor #4: Market complacency. This is a recently added risk factor that aims to capture a standardized measure of market complacency across time. Complacency can be an uncertain term, so this chart identifies and combines two common ways to measure complacency: valuations and volatility.

For the valuation component of the index, we are using the forward-looking, price-to-earnings ratio for the S&P 500 over the next 12 months. This gives an idea of how much investors are willing to pay for companies based on their anticipated earnings. Typically, when valuations are high, it signals that investors are confident and potentially complacent. For volatility, we have used the monthly average level for the VIX, a stock market volatility index. When volatility for the S&P 500 is high, the VIX rises, which would signal less complacency.

By combining the two metrics in the chart below, we see periods where high valuations and low volatility have caused peaks, such as 2000, 2006–2007, and 2017. We saw market drawdowns within roughly one year following each of these peaks. 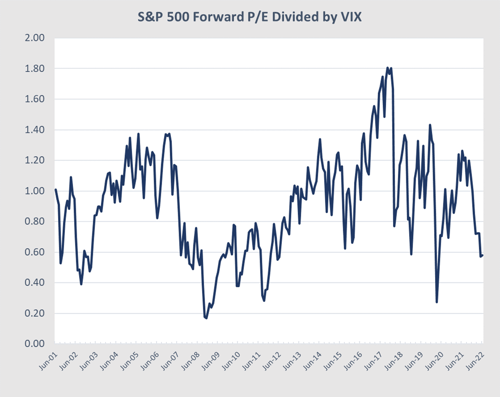 Historically, readings exceeding 1.2 have been a signal that market complacency may be at concerning levels. The result for the index in June is a sign that complacency continued to remain outside of the potential danger zone we hit in October 2021. Given the still-low level of complacency in June, we have left this signal at a green light.

The continued market turbulence in June was another reminder that markets currently face real risks that should be monitored. Inflation and interest rates will continue to drive uncertainty for investors in the months ahead and could cause future short-term declines. Rising concerns about a potential slowdown for the economy due to tighter monetary policy may also spook investors in the months ahead.

That said, it is possible that we will see risks start to diminish and markets start to rebound in the second half of the year. At this point, however, the risks remain high, and markets may see further losses before a rebound.

Ultimately, the path back to a more normal economic and market environment will likely be long, and we can expect setbacks along the way. Given the fact that many of the indicators we track in this update have dropped to red, we have kept the overall market risk level at a red light for now.